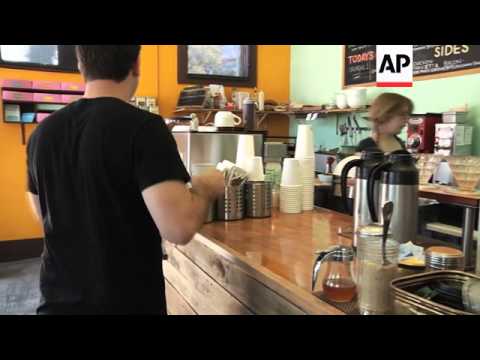 (25 Jul 2012) LEAD-IN:
In San Francisco’s Industrial Zone, South of Market, the recession is long gone.
As new residents with plenty of disposable income move in, technology companies are changing the face of the city.
STORYLINE:
Techies from Palo Alto and Silicon Valley are crossing the historic bridge and setting up home and shop in San Francisco.
It’s become so crowded in the downtown San Francisco office of Sneakpeeq, a social shopping startup, that the company is looking for a bigger space.
San Francisco is home to more than 1,500 tech companies employing more than 30,000 people.
The sector is expected to surpass the number of jobs it provided at the height of the dot-com boom of 1995-2001.
Sneakpeeq CEO Harish Abbott says San Francisco works for his company for two main reasons: technical people want to be in the city, and the creative people they need already live there:
“It’s an exciting scene, there’s a lot of young people who want to come and work here in the city and it’s a great ecosystem that’s building up, especially South of Market, that we are very proud to be part of.”
SoMa was once an industrial neighbourhood, but things are changing.
San Francisco has been providing incentives for the companies to come to the city and stay as they grow. While the measures are currently under debate, the city is now offering payroll tax exemptions to cleantech, biotech, certain companies like Twitter that move into the blighted downtown section of the city, and companies that hire disadvantaged people.
These controversial exemptions have not been offered to all tech companies, and payroll taxes along with the high cost of office space still pose formidable challenges for many startups. Nevertheless, they keep coming, and people want to work for them.
As technology heats up, young people are flocking to find jobs here.
InternMatch recently hosted a startup tour for students eager to get a taste of San Francisco.
Marketing intern, Sarah says: “So I wanted to work in San Francisco because I believe that there is an air of entrepreneurship here and the city life also goes with that. It’s just a really fast-paced, fun place to work. It’s super laid back. It’s just a departure from the normal corporate world that I feel like America has been obsessed with for so long. And I wanted to come out here and just honestly network with people my age. There’s such a sense of youthfulness in the air too, so I just wanted to become part of that growing generation of do-gooders and entrepreneurs my age.”
Matt Vaznaian, 25, recently moved from San Jose where he worked at Cisco Systems, to San Francisco to work at StackMob.
The pull of the city and the excitement of a startup were stronger than financial concerns, he says:
“I chose to live here because I really feel like for someone who is young, like me, who is looking just to be social and to go out and to have lots of different options of places to eat and drink, that the city is a great choice because that’s all very accessible. You don’t have to drive and you are constantly surrounded by people. However, it’s definitely a little bit more expensive to live here, but that’s something that I personally am ok with, knowing that I’m having the experience of living in a city.”
That reasoning was behind Ty Amell’s decision to co-found StackMob in the city – he knew it would be easier to find talent then if the company were based in Silicon Valley.
Amell says many software engineers are a special breed and find in San Francisco a place where they can feel comfortable being both smart and young:
Even as the money rolls in, San Francisco is about simple pleasures and friends. Everyday, StackMob employees take a quick walk down to a local food truck gathering.